Tracie Peisley is an exhibiting fine Artist and Art Therapist who specialises in running community art groups and private art lessons, expanding the individual's sense of what might be possible through being creative. Bridget McVey is a ceramicist running Clayspace Studios, based in Margate. It is a not for profit workshop used by professional artists to make for galleries, local groups and ceramic commissions.

Tracie approached POW! Festival 2018 and Bridget McVey Clayspace Studios with a proposal to run a programme of workshops which would celebrate achievements. The idea was to acknowledge and celebrate all achievements, those everyday accomplishments that get taken for granted along with those aspired to and eventually achieved. 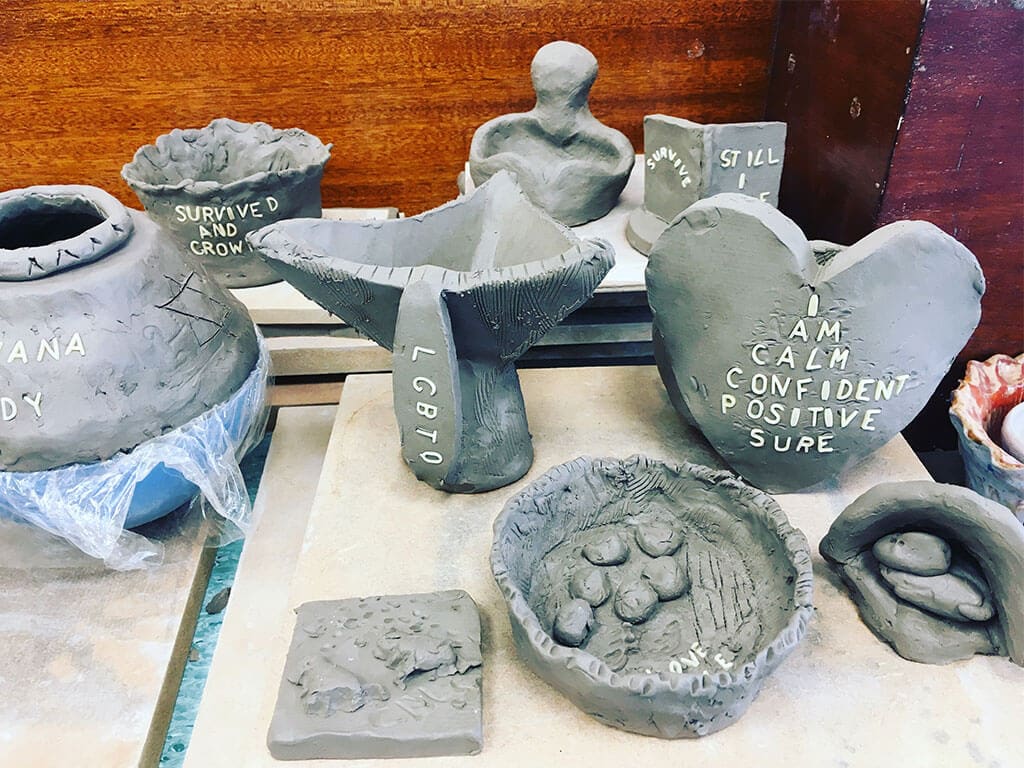 Tracie believes in empowering participants to be self-directed in their creative journey. The idea was to invite women in to a creative space, Clayspace, who wouldn’t necessarily have thought to make a piece of Art. A place that was in the community and could be re-visited autonomously following the funded projects.

The POW! Festival team supported the project and Rachel Connelly (POW! Community Engagement), was invited to approach groups from the Thanet community who might know of participants that would engage with the project and find it beneficial.

The workshops were partly therapeutic, involving sharing experiences and promoting self-esteem and partly educational, introducing a new media and learning skills. The experiences shared had a profoundly positive effect on the group.

‘I’ve never done anything like this before, I can’t believe I’ve made it, thank you for giving me a space.’

‘I loved being part of a group, what fun! Hilarious! Emotional! An Achievement! I’m going to take this back to my group and give it to them.’

Upon acknowledging their achievements, the women would each make a clay trophy, to be fired and then decorated with glazing and re-fired at Clayspace over two 2-hour sessions. The women would then be invited to proudly hold their trophy and be photographed. The photographs will be displayed as part of the POW! International Women’s Day celebrations at Turner Contemporary, Margate in March 2018.

The workshops will also be delivered to other groups within the community. Health providers or community groups interested in this project for well-being and engagement can contact Tracie directly.

As part of the POW Festival of Arts (7th – 11th March 2018), Tracie and Bridget are also running the

Vatoussa is a tiny village situated on the Northwest side of the island of Lesvos in Greece Tracie re-located there in 2013 with her partner and daughter who was then 3 years old. She wanted to aid the integration of her family into village life and also share her skills and knowledge of the Arts with the community. With support of Ann Welch who had previously ran icon painting workshops with the children and the resident school teacher Niki, Tracie approached the Mayor of the village Kirios Avil to undertake a series of weekly workshops in the ‘metamorphosis’ or village hall. The Village donated art materials and Tracie and Niki donated their time running age differentiated workshops for 3-18 year olds with some adults. Tracie’s daughter has attended the workshops since they started.

Since this time Tracie is no longer a permanent resident, however her commitment to the arts in Vatoussa persists and when in Vatoussa the workshops continue. In June 2017 Tracie is running an Art Competition for the village, to encourage creativity and give art materials as prizes so that the children might continue to make art between her visits. Tracie does not charge for the workshops and has raised the funds for materials and prizes through the workshops she runs in Whitstable.

The village are very proud of the work made by the participants and regularly run full colour articles in their village magazine, ‘The Pulse of Vatoussa.’

Tracie has run a series of enrichment workshops for women creatives committed to the Pandora’s Other Box project. The workshops support individual creative process and challenge women to work in different media in an experimental and playful way. Tracie facilitates discussion of ideas and process in meetings and plenaries. The programme leads to an exhibition of the women’s work and is focused around a theme. The workshops are co-facilitated by Colleen Rouse.

Tracie runs regular private workshops from her Whitstable studios for small groups and individuals who want to develop their artistic practice. Tracie believes in accompanying the individual’s process and the lesson’s taught are bespoke, building on the individual’s interests and passions. Tracie has considerable experience in the arts and is able to facilitate sessions in many media. Frequently the sessions give enough confidence for artist’s to continue to develop their work alone and/ or join further groups. Please contact Tracie if you are interested in 1:1 or small group sessions.

Tracie is a qualified HCPC registered Art Therapist experienced at working with adults and children in educational, medical and community sessions. Art Therapy is a blend of talking therapy and art making which helps resolve areas of conflict or anxiety which impact on our lives. The individual sessions are fixed one hour appointments and are arranged following an assessment meeting.

Tracie has also worked as an Art Therapist with groups of professionals, training Artists and school leavers to become aware of the needs of those with mental health problems, using art materials to offer stimulation, support well-being and aid communication with a variety of client groups.

Her C.V is available on request.